Written by André Malraux, this book phenomenal book contains 12 original drypoint etchings on parchment by Salvador Dalí and individually signed and numbered by him. Malraux was an important French writer and art historian and was Minister of Cultural Affairs during Charles de Gaulle’s presidency. The text of this book discusses the events of May 1968 and de Gaulle’s fall from power.  It was later incorporated into Hôtes de Passage (Passing Guests) (1975), which in turn was to become part of La Corde et les Souris (The Cord and the Mice) (1976) and Miroir des Limbes (The Mirror of the Limbs) (1976), the last of which was published just before Malraux’ death from a pulmonary embolism.

The book in this edition is notable not only as the first appearance of that text but also for the extraordinary etchings that Dalí created to accompany it. The etchings depict classic Dalí imagery such as bony, metamorphosing figures in eerie landscapes and as such they are clear examples of the surrealist style for which Dalí is famous. An unusual visual index of the plates is also included.

This massive volume was published by Albert Skira. It was printed on deckled Rives paper watermarked with an emblem Dali designed to include his name and the initials of Malraux and Skira. Each of Dalí’s etchings on parchment are signed and numbered. Two additional unsigned etchings on Rives paper are included with the text.

This book is loose as issued with the original paper wrapper. It comes in a half leather chemise with parchment sides and a protective slipcase covered in black leather. The emblem used as a watermark in the text pages is stamped in black on the front cover of the chemise, and the title is tooled in gold on the spine. Aside from a small crack in the leather at one corner of the slipcase, this book is in excellent condition.

This copy is number 62 out of an edition limited to 150 with ten additional copies hors commerce. It is signed by the author, the artist, and the publisher on the justification page.

Since the mid-1990s, Peter Doig has depicted snow sports in his paintings and prints drawing on his experiences as an adolescent in Canada. For this limited edition work, Doig chose The Wonders of Ski-ing, using a 1933 translation of the second German edition of Wunder des Schneeschuhs, first published in 1925.  As Doig often works from photographs and film stills to create his art, his choice of this book, with its hundreds of black-and-white photos and film stills depicting skiing techniques, makes it an apropos choice.

This hardcover book is housed in a clamshell box covered in tan-colored paper. For this edition, Doig designed an illustrated bookplate that is inserted loose inside the front cover of the book. An original etching by the artist featuring a skier is also included and is protected by a folder of glassine and housed in the box with the book.

Created as part of the Edition Ex Libris series of books edited by Gerhard Theewen and published by Salon Verlag, this book was issued in an edition of 40. The illustrated bookplate and the etching are initialed by the artist and numbered 38/40.

American Dream collects a total of 30 screenprints in Indiana’s distinctive style along with poems by Robert Creeley that were inspired by Indiana’s work. Also included in this title is a foreword by Susan Ryan and captions by Michael McKenzie describing the origins and significance of each piece.  Twenty-four of Indiana’s screenprints are bound into this large volume. The remaining six are held within the book by Mylar corners so that they are removable. Tipped in above each of the six removable prints are sheets of translucent vellum-textured paper, on which Creeley’s poems are printed in red. This collection contains many familiar works, including prints of his American Dream series as well as different versions of LOVE – one of which is transliterated into Hebrew and another that is printed in the colors of the German flag. Black-and-white photos of Indiana are reproduced at intervals throughout the text.

This copy of the book is number 114 out of a total edition of 395. Each of the removable prints is signed and numbered by Indiana and the colophon is signed by the publisher. This book comes with a certificate of authenticity from the publisher.

Thirty-six printed books in 3 sets of 12 volumes each; 3 wooden slipcases

The three sets of books that comprise Trilogy (I Got Up, I Went, and I Met) document three aspects of the daily life of Conceptual artist On Kawara: where he awoke, where he went, and whom he met.  The 36 books compile these particular details for twelve years of the artist’s life as he traveled around the world and thus, arguably at least, could pose any number of certainly unanswerable questions about time and space, the significance or lack thereof of the mundane details of a single person's life.  Clearly, of course, at the very least, they question the nature and the meaning of an artist's obsession.

During this period, the globetrotting Kawara mailed postcards to friends and colleagues, stamping them with the time at which he arose each day and the address at which he was staying. The 12 volumes of I Got Up reproduce these postcards as a collection.  For the I Went part of his project, Kawara marked in red ink on a black and white photocopied map with the route he travelled each day and then stamped the map with the date.  For I Met, Kawara made a list of all the people he talked to during the day arranged in the order in which he talked to them. The 12 volumes in I Met compile these lists.  Gray dividers within each book note changes in location as Kawara travelled to cities around the world.

Each set of books was published in a total edition of 100 copies, including 90 copies and 10 A.P. copies. The twelfth volume within each set is numbered 89/90 and initialed by the artist on the colophon.

Limited edition letterpress printed book illustrated with 42 etchings; slipcase; extra suite of 22 of the etchings in a separate folio

This book represents a successful collaboration between a prominent Abstract Expressionist artist and a prominent American fine press.  This is a very large book, thanks to its author James Joyce, and it contains on its 838 numbered pages one of the landmark literary works of the twentieth century.

Contained in the book are forty etchings, twenty of which are in color, by Robert Motherwell. This copy of the book includes the scarce extra suite of twenty-two Motherwell etchings published simultaneously with the book.  Each etching, 13 x 10 inches, is numbered and signed by the artist and placed in a folder which, in turn, is placed in a separate portfolio.  Only forty of the original 150 copies of the book have this extra suite of prints, and a complete set rarely becomes available for sale. 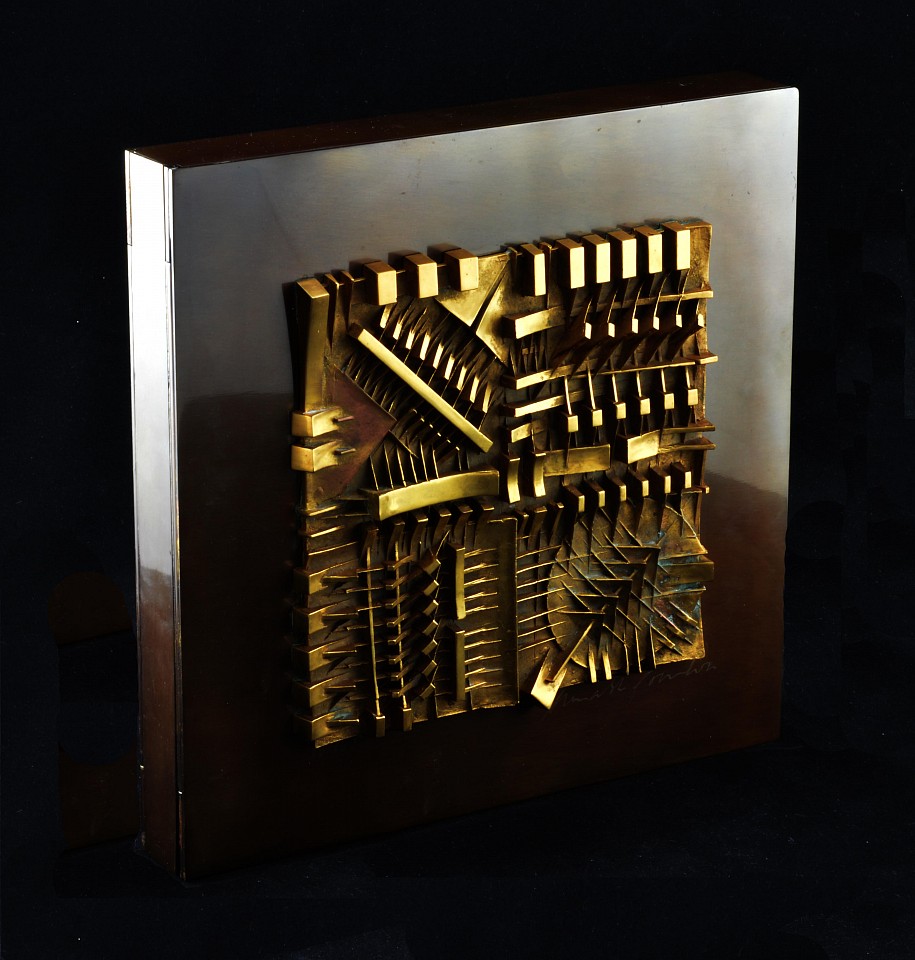 Having helped the renowned Italian sculptor Arnaldo Pomodoro arrange an exhibition of seventy of his artworks during the 1970s, the American critic Sam Hunter was well prepared to compile this catalogue raisonné on Pomodoro’s art. Coinciding with the release of Arnaldo Pomodoro, the sculptor created a limited edition sculptural case to house Hunter’s book. The cover of this metal case features an elaborate, geometric relief sculpture in bronze with a gold patina. The sculpture is an exquisite example of the artist’s distinctive style. The cover is etched with the artist’s signature and numbered 38 of 50 below the sculpture. The inside of the case is lined with brown felt.

The catalogue features numerous black-and-white and color photographs of Pomodoro’s art and is bound in cloth with the original dust jacket.