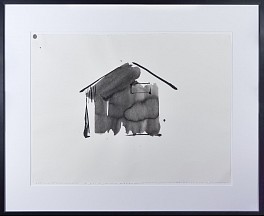 Gates’ art is not so much about social engagement as it actually is social engagement.  His best known work is The Dorchester Projects which invests in abandoned properties in his own neighborhood, renovates them, and then uses them to preserve and promote the cultural resources already present in the surrounding community.  Gates explains, “[i]t is hard to understand that in an area where there is abject poverty, simply choosing to stay becomes a radical act, even if you didn’t intend it to be . . . .”

The Dorchester Art and Housing Collaborative (DAHC), in collaboration with developers, architects, the Chicago Housing Authority, and Gates’ own Rebuild Foundation, is responsible for the rehabilitation of thirty-two housing units for artists receiving low income housing support.  The development includes common spaces for performance so that the work of those living there can be shared.  For Gates, this work is, in his words, “quiet and sincere and beautiful.”

Gates received a B.S. degree in Urban Planning and Ceramics from Iowa State University, a masters in Fine Arts and Religious Studies from the University of Cape Town, and another masters from Iowa State in Urban Planning, Ceramics, and Religious Studies.  He has received honorary degrees from the University of the Arts (London) and the Massachusetts College of Art and Design.  He currently teaches at the University of Chicago where he is Professor in the Department of Visual Arts and the Director of the Arts + Public Life program.  He has received numerous awards including the Artes Mundi and the inaugural Vera List Center Prize for Art and Politics, both in 2013.

His work has been shown at Documenta 13 in Kassel, the Whitney Biennial in 2010 and at many museums including the Walker Art Center, the Victoria and Albert, the Smithsonian American Art Museum, the Museum of Contemporary Art (Chicago), the Milwaukee Art Museum, and others.