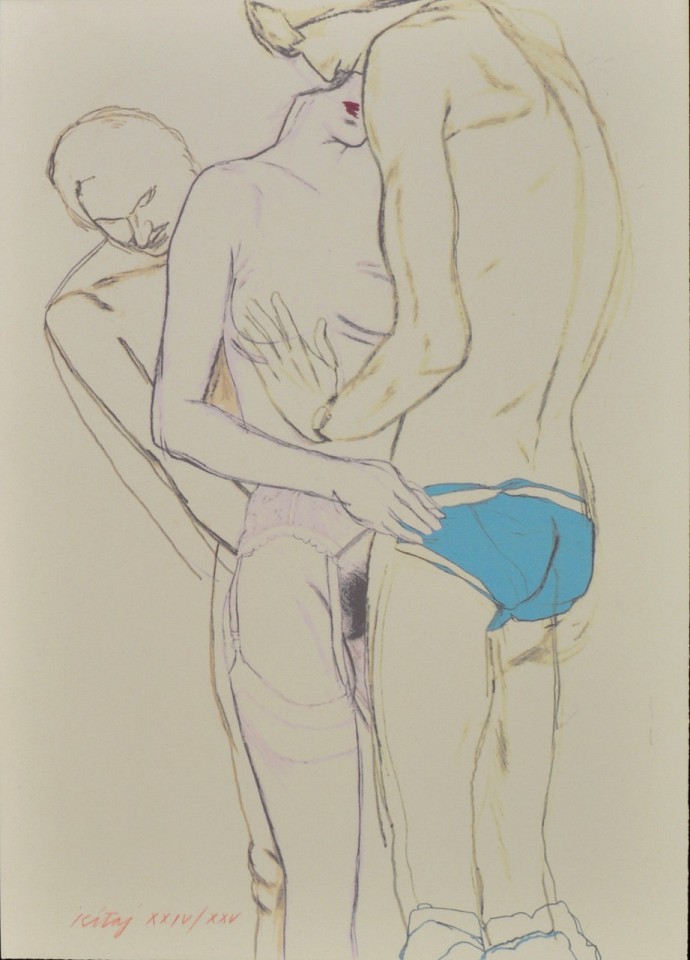 In the early 1970s, painter and printmaker R. B. Kitaj collaborated with his friend, the poet Robert Creeley to illustrate A Day Book. At this time Creeley, as a poet, was breaking soen the idea of a single poem by offering his readers sequential, associated fragments of poems with indeterminant beginnings and endings.  Creeley’s passages in this book are printed on various colors of paper in a different typeface on each page. The mostly figurative illustrations by Kitaj also incorporate bits of text. These 14 full-page hors texte illustrations represent one of Kitaj’s most complex print series as well as his last major series of prints. The illustrations include four etchings with additional screenprinted imagery, one lithograph, one screenprint on canvas, one screenprint on acetate, two screenprints on heavyweight cream-colored paper (inserted loose in the book), and five screenprints on colored Eastern-made papers.

One of 25 copies of the Edition de Tête of A Day Book, bound in leather and containing one extra screenprint unique to this edition plus some prints on different papers from the other editions.  This copy is numbered xxiv/xxv and signed by the author and artist at the colophon. In addition, all prints are signed and numbered xxiv/xxv by the artist.

R.B. Kitaj | A Day Book | 1972 | BOREAS FINE ART
Tip: You must first enter a valid email address in order to submit your inquiry