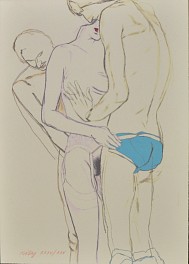 Known for his figurative paintings, American painter and printmaker R. B. Kitaj was born Ronald Brooks near Cleveland, OH. Formal education included studies at the Cooper Union Institute in New York, the Academy of Fine Art in Vienna, the Ruskin School of Art in Oxford, and the Royal College of Art in London. In the 1950s, he worked as a merchant seaman, visiting South America, and also served in the U.S. Army.

Kitaj began his artistic career in the 1960s, creating paintings such as Red Banquet (1961) that were inspired by literature, art, and political history. His collage-like figurative works alluded to a variety of styles and were sometimes linked to Pop Art, although Kitaj himself resisted this label. Over the course of his career, Kitaj’s artwork became more personal and reflected his reawakened interest in his Jewish heritage. His autobiographical work of the 1980s and 1990s includes The Wedding (1989-90), memorializing his marriage to artist Sandra Fisher.

As a printmaker, Kitaj created many graphic works with master screenprinter Christopher Prater at Kelpra Studio in London beginning in 1963. Many of these works were collage-based prints that made use of ready-made material, such as the portfolio In Our Time (1969-70), which featured prints of the covers of Kitaj’s favorite books. However, by the mid-1970s, Kitaj’s interest in drawing from life led him to reject many of his earlier graphic works. Among the few artist’s books that Kitaj created or contributed to are a collaboration with poet Robert Creeley entitled A Day Book (1972) and the Arion Press edition of Self-Portrait in a Convex Mirror (1984) by John Ashberry.