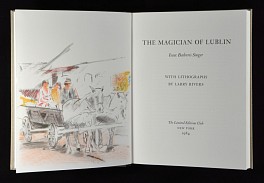 Infamous for his iconoclastic nature and his bad boy persona, Larry Rivers was also a well-regarded painter and sculptor. Born Yitzroch Loiza Grossberg in the Bronx, Rivers began his career as a jazz saxophonist and began painting at the suggestion of a friend. He studied with Abstract Expressionist Hans Hofmann in the late 1940s but his interest in figurative painting soon led him to move away from the influence of the Abstract Expressionist movement despite the overwhelming attention it was receiving in the New York art world.

Rivers developed his own style that was loose and colorful and his paintings typically had rhythmic compositions that were doubtless informed by his jazz training. Often appropriating images from consumer culture, mass media, art history, and everyday life, Rivers’ paintings anticipated many of features that would become hallmarks of Pop Art. One of Rivers’ most well-known paintings is Washington Crossing the Delaware (1953) which reinvents, as a jazz riff might reinvent a traditional melody, the famous painting by Emanuel Gottlieb Leutze of the same name. Later in his career, Rivers began to work more heavily with mixed media assemblages, printmaking, stenciling, and airbrushing.

Throughout his career, Rivers frequently collaborated with poets, playwrights, and other artists.  Rivers collaborated with writer Kenneth Koch on a number of projects including the books When the Sun Tries to Go On (1969) and Diana with Poem (1974). A seminal book collaboration was the portfolio Stones (1957-8), created with poet Frank O’Hara at the initiative of Tatyana Grossman at her Universal Limited Art Editions workshop.

Rivers’ works are found in the collections of the Museum of Modern Art, the Tate Gallery, the Guggenheim Museum, and elsewhere.  In 2002 the Corcoran Gallery of Art in Washington D.C. staged a comprehensive retrospective of his work.