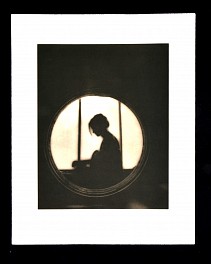 Josephine Sacabo is a photographer who creates mysterious, dreamlike images of ghostly figures and shadowy scenes. She was born in Laredo, TX, and studied at Bard College in New York. Influenced by Robert Frank, Josef Koudelka, and Henri Cartier-Bresson, Sacabo initially worked in the photo-journalistic tradition but her more recent photographs, frequently inspired by poetry, are executed in a highly subjective, surreal style and are reminiscent of the photo-secession movement at the turn of the last century. To create her work, Sacabo frequently uses early photographic processes, such as wet collodion on metal and photogravure.

Sacabo’s work has been published in several portfolios and books. Most notably, she has worked with 21st Editions to create three artists’ books. Cante Jondo (2002), a book of poems by Ana Cristina Rudholm y Balmaceda, and The Duino Elegies (2005) by poet Rainer Maria Rilke. Gilded Circles and Sure Trouble (2012) contains the poetry of Keagan LeJeune and is illustrated by ten platinum prints of photographs taken by Sacabo. A separate portfolio of her photogravures, a process she undertakes herself, is also included with this book.

Sacabo lives and works primarily in New Orleans. She is the recipient of several awards, and her work can be found in the collections of the Art Institute of Chicago, the Museum of Modern Art, the Bibliothéque Nationale de France, and others.