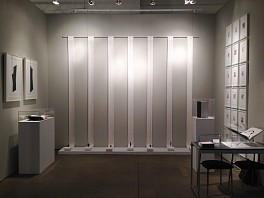 Harriet Bart is a conceptual artist whose works often explore the themes of memory and commemoration. Bart grew up in San Francisco and received a B.A. from the University of Minnesota where she studied textile arts. In the 1970s, she became a founding member of the women’s artist collective W.A.R.M. She later became a founding member of the Traffic Zone Center for Visual Art in Minneapolis.

Since the 1980s, Bart has used books both as sculptural objects and as bearers of images and text in her multi-faceted installations and other works. Since 2000, she has also made limited edition artist’s books under the imprint Mnemonic Press. Many of these books complement a body of work focusing on a particular subject or theme that Bart has developed across several media.

Bart is the recipient of many awards, including three Minnesota Book Awards from the prestigious Minnesota Center for Book Arts. She has received fellowships from the McKnight Foundation, NEA Arts Midwest, and the Minnesota State Arts Board. Her work may be found in the collections of the Metropolitan Museum of Art, Walker Art Center, Jewish Museum, and Laumeier Sculpture Park and Museum, among many others.