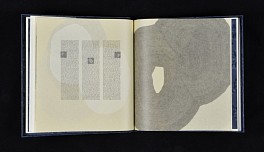 More widely known in Europe than in the United States, François Righi is a French artist who has worked with the book form since 1975. Born in 1946, Righi studied at the École des Beaux-Arts in Lyon and has created artwork as a painter, sculptor, printmaker, and installation artist.

Righi has created or contributed to over 50 books. He uses a variety of printmaking techniques to create his books, but is perhaps best known for his low print-run engravings. As part of a personal mythology that Righi investigates in his art, many of his works include the symbol of the peacock and the ‘eyes’ found on peacock feathers. His book Pavo: fragment sur le paon bleu (1986), featuring 10 engravings, is one example of this.  Other books by Righi include Un livre muet pour Jean Allemant le Jeune (2005), featuring abstract drawings printed by silkscreen which were inspired by a Book of Hours owned by Jean Lallemant the Younger, and Petit jour (2011), featuring striking engravings inspired by a portrait painted by Petrus Christus in the 15th century.

Righi has exhibited widely in Europe and his books are held in the collections of the New York Public Library Rare Book Collection, Bibliothèque Nationale de France, Bibliothèque Kandinsky du Centre Pompidou, the Koopman Collection at the National Library of the Netherlands, The Getty Research Institute, Los Angeles, and others.