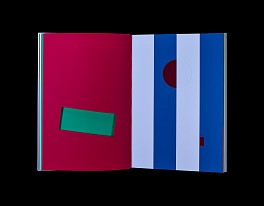 French painter and Conceptual artist Daniel Buren graduated from the Ecole Nationale Supérieure des Métiers d’Art in 1960.  Since the mid-1960s his work has consistently been limited to patterns of brightly colored stripes of a uniform width alternating, usually, with white stripes of the same size.  Art scholars and critics Charles Harrison and Paul Wood have described the philosophy underlying his work as follows:  “His declared aim is to reduce painting to its essential state, by this means to effect a rupture with traditional concepts of development in art, and to reinstate painting as a practice of theory as distinct from decoration or carft.”

A participant in the movement called Institutional Critique, Buren began painting his stripes on various types of support and in unusual or even inappropriate settings as a way of moving art away from what he considers the artificial environments of museums, galleries, and the walls of collectors.  Despite this distain for the venues of the traditional art world, Buren nevertheless has work in the permanent collections of the Museum of Modern Art, the San Francisco Museum of Modern Art, the Tate Modern, the Museo Guggenheim (Bilbao), and many others.  In 1986 he represented France in the Venice Biennale and won the Golden Lion Award.  He has had solo exhibitions at the Centre Pompidou and the Tokyo Museum of Contemporary Art.